Ibnsina Pharma S.A.E. intends to proceed with an initial public offering on the Egyptian Exchange (the "Offering") that is expected to consist of a primary Offering of newly issued shares and a secondary Offering of existing shares held by the Company’s current shareholders (collectively the “Shares”) constituting up to 38% of Ibnsina Pharma’s total shares. Proceeds from the transaction will be used to grow Ibnsina’s core distribution business and support its expansion into new, higher-margin revenue streams. The Offering is expected to take place in late Q4 2017 or early Q1 2018, subject to market conditions and the receipt of regulatory approvals. 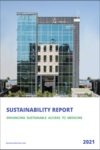